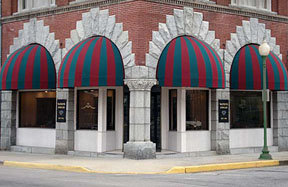 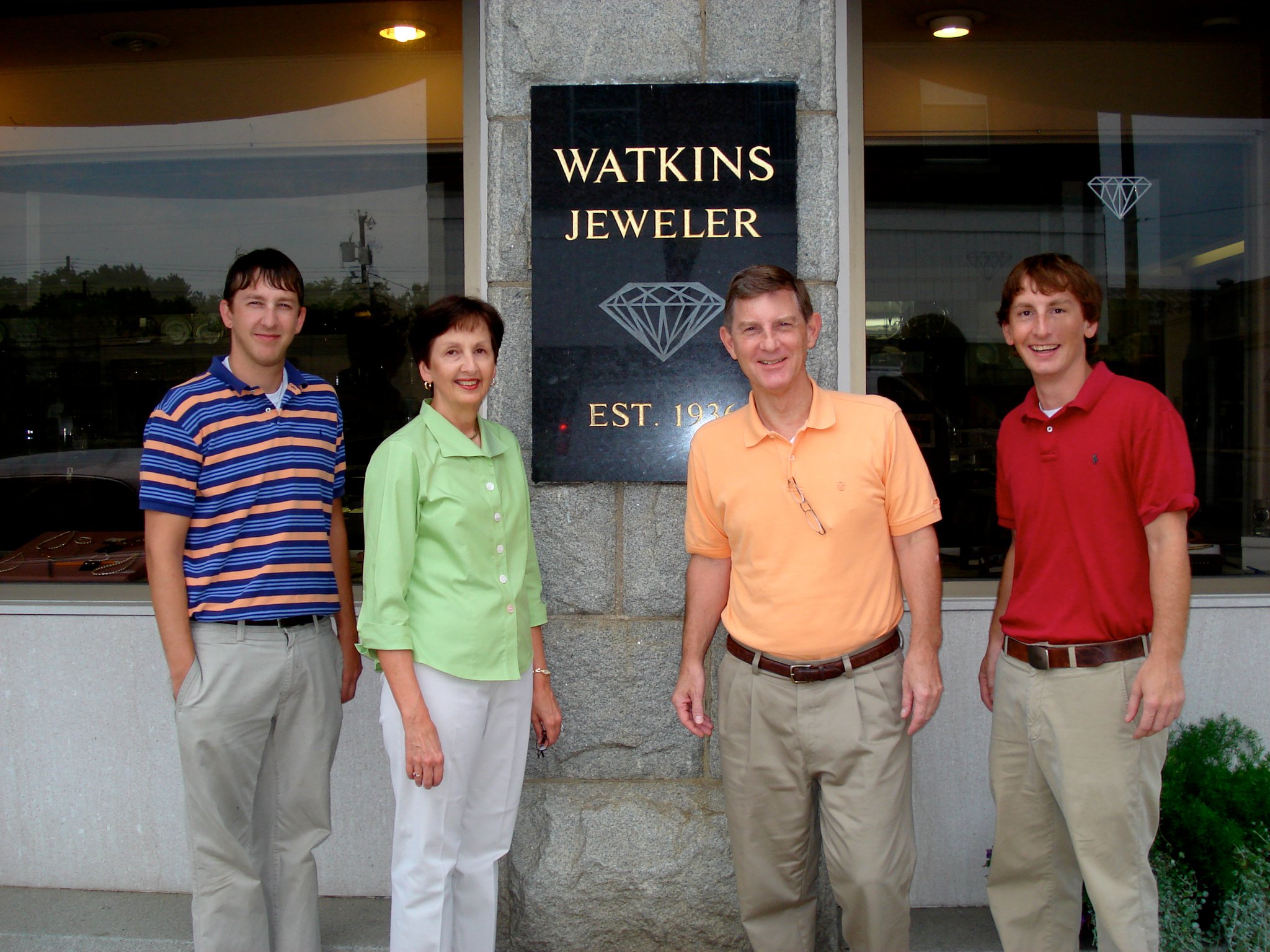 Watkins Jewelers is no ordinary jewelry store. First established in 1936, it officially joined the Watkins family in 1951. It is a store that carries itself with its head held high while still being warm and down-to-earth. The Watkins family defines good taste, friendliness, quality, and confidentiality. Tommy, his wife, Polly, and their two sons, Tate and Will, run the business together.

Everyone was happy to show me around and answer my questions. I learned a lot about pearls, custom work, silver pieces, and that most cameos are made from shells, rather than ivory, as I had supposed. The Watkins family is careful to educate all their customers so they can make the purchase that is right for them.

DT: “Can you talk to me about the store’s history?”

PW: “In 1936 it was in the old Nottoway theater building. And then it moved up to the middle of the block and Winston [Tommy’s father] bought the business in 1951.”

DT: “And when did your family take it over?”

The Watkins’ involvement in the community, near and far, impressed me.

PW: “I think one thing about this store is that we have whole families and each generation has come in to buy their engagement rings here, anniversary presents here, we have families and, you know, father and the mother, then all the sons and daughters, it’s unbelievable.” 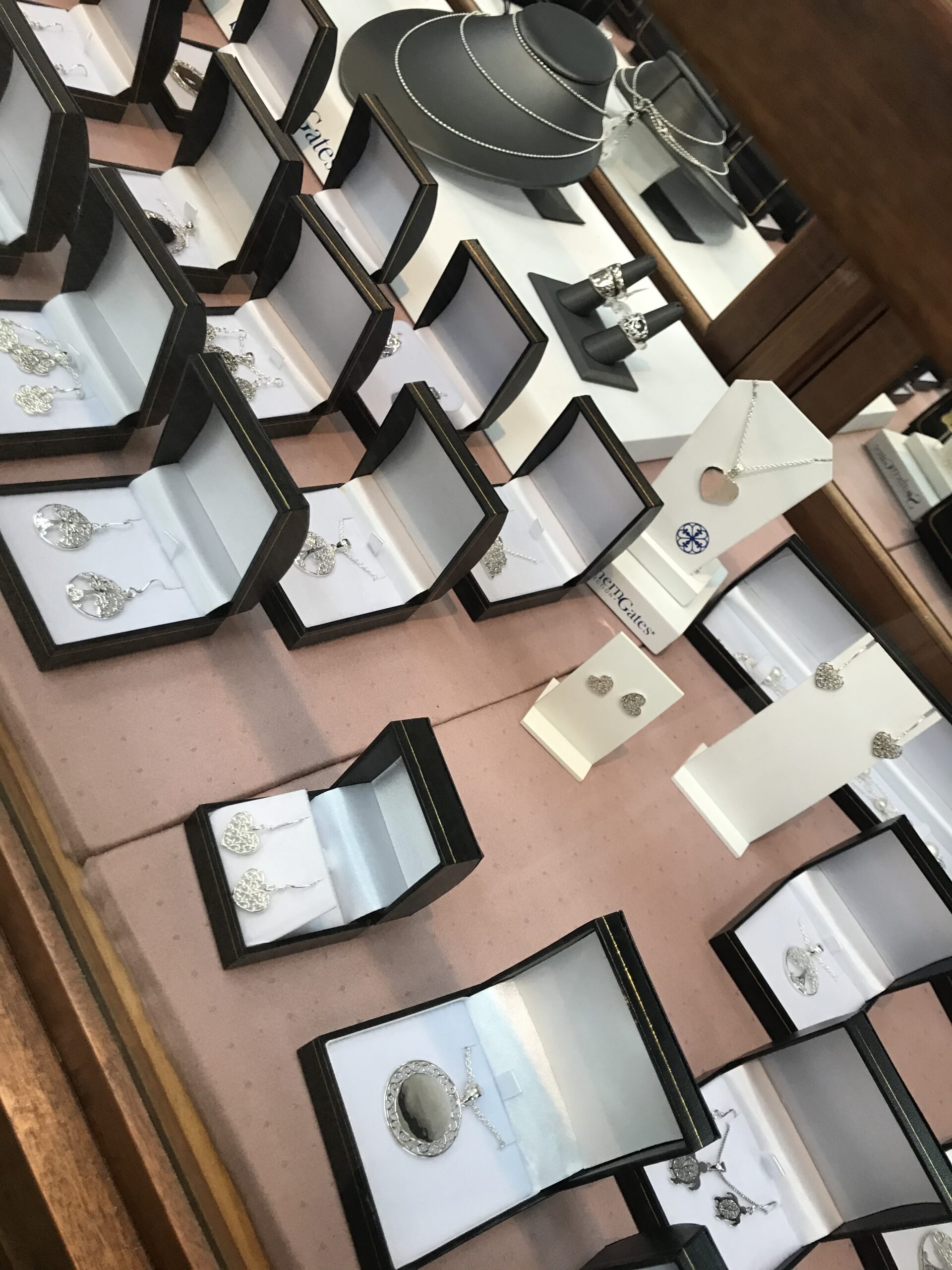 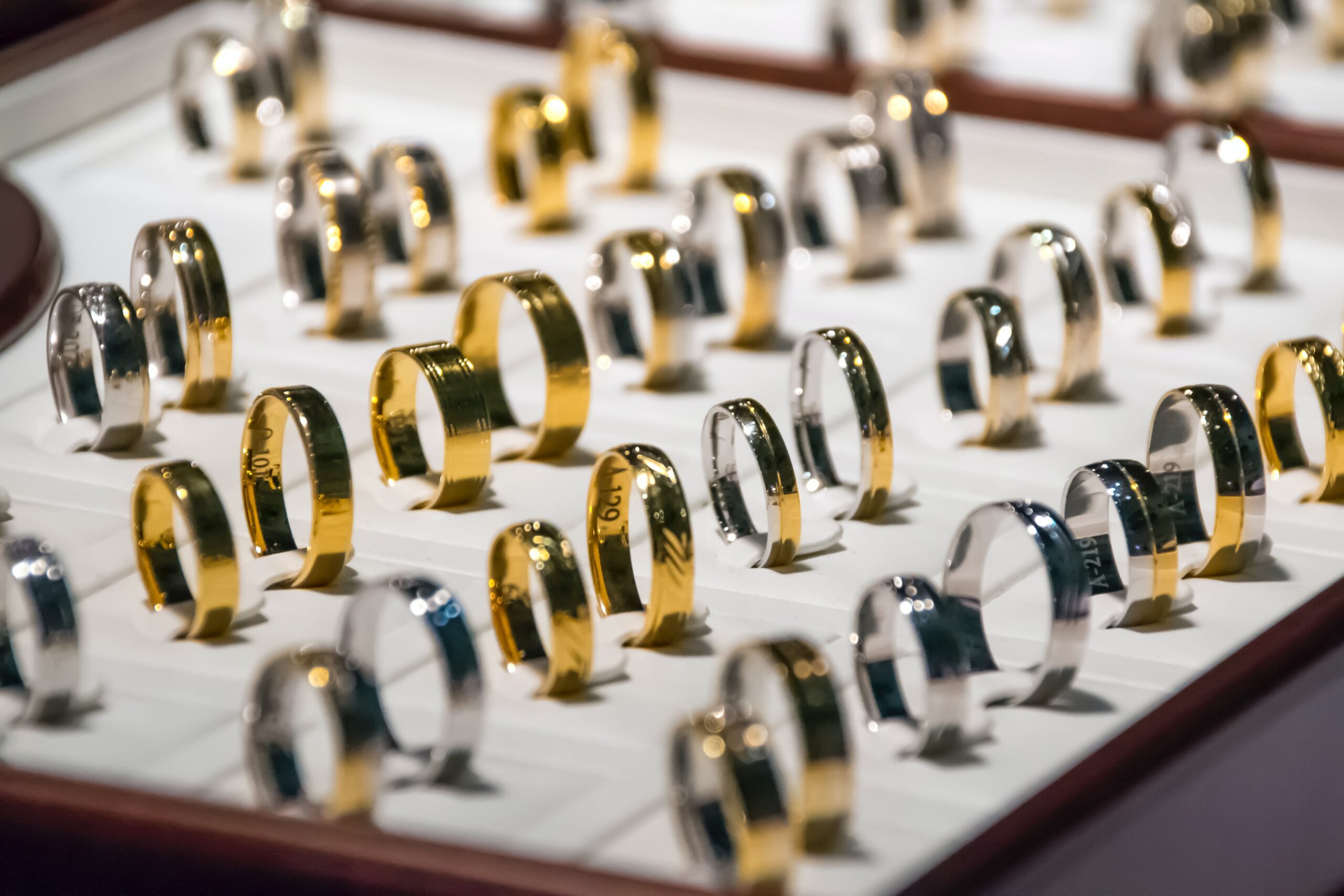 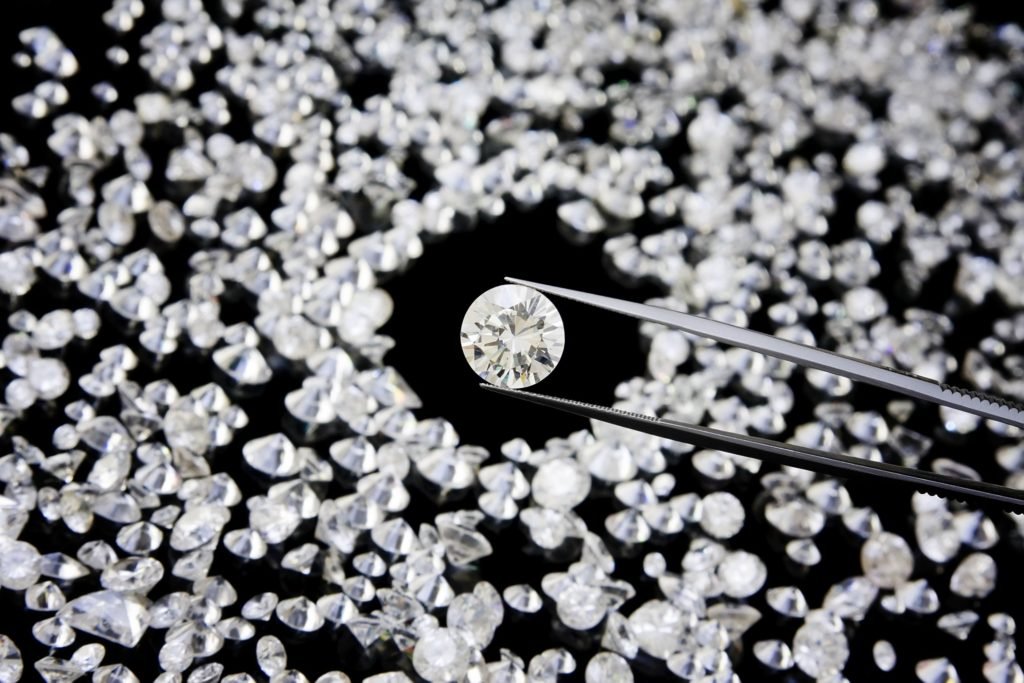 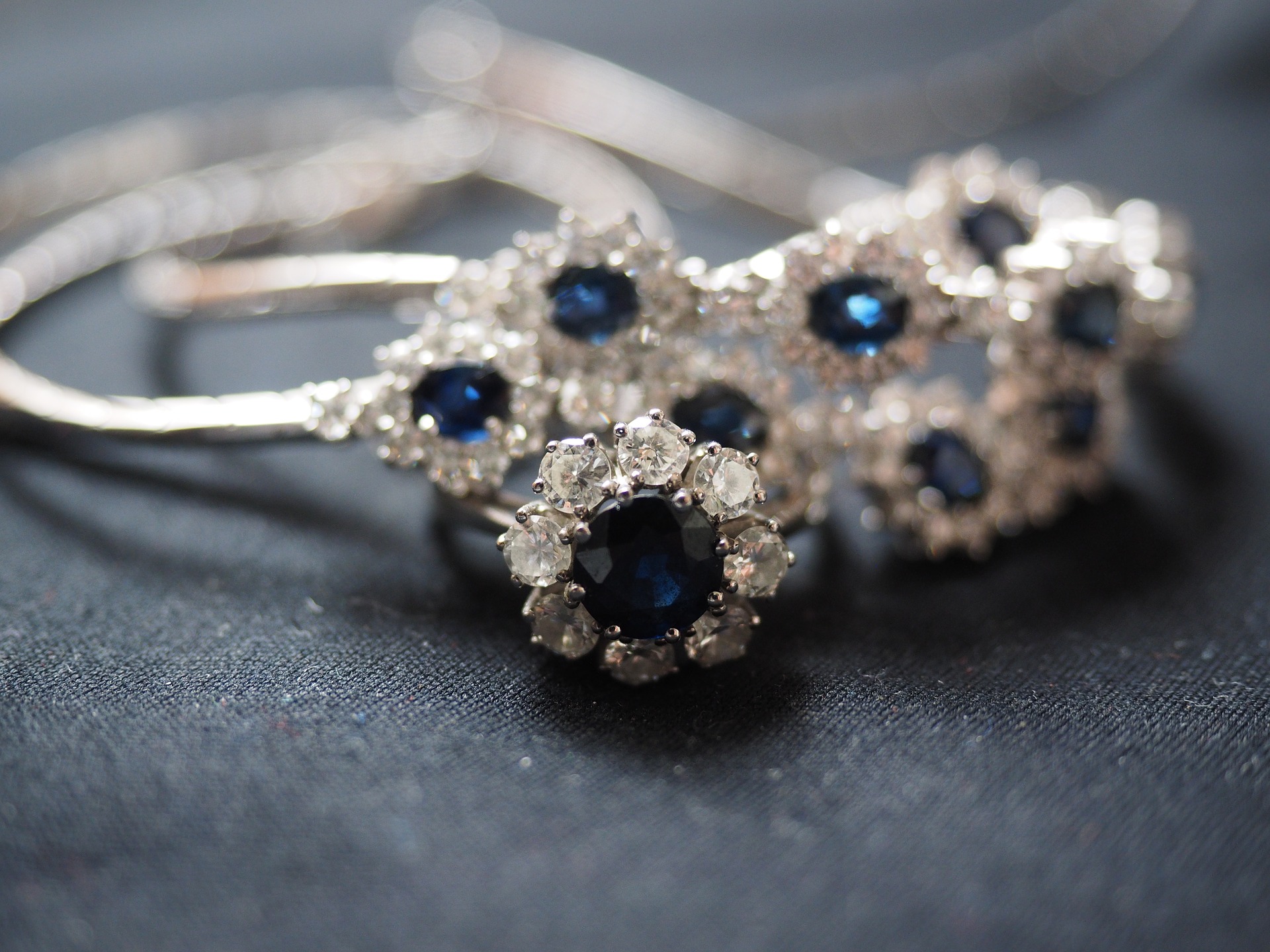 DT: “That’s amazing! What is your role here? Do you do a lot of buying for the store?”

PW: “Yes. When I came here, I was doing most of the bookwork. Tommy’s dad was still here and he was ready to get rid of all that, so I took over all the accounting. Then he passed. As time has gone on, and we’ve grown, I took over ordering most of the basic stock.”

DT: “It definitely has that touch of someone who’s worked in higher-end retail.”

PW: “Tommy does most of the high dollar purchasing. I do all the silver, all the basic stock. When we go to the shows, of course, we both look at stuff together.”

DT: “Is that where you source a lot of your loose stones?”

PW: “We have vendors for loose stones in New York, basically. So if a customer comes in, [Tommy will] get an idea about what they’re looking for, what size, what their budget is, and show the prices. And then we do cost plus twenty [percent] on the cost of the diamond. He’ll go to the diamond dealers and they will send in like two or three stones and the customer will come back and look at them and he’ll show them what they are [the cost] and add his 20%, plus the mailing.”

The family dynamic at Watkins Jewelers is what keeps the business going; plus their desire to make people happy.

TW: “Some days,” he answers with a good-natured chuckle. “It’s a rewarding job. I do something different every day, which is good. I never get bored.”

WW: “It has its challenges, but I get to spend all day with my family. That’s kind of a rewarding thing. And even though we drive each other crazy, at the end of the day, we all get to be together.”

TW: “It’s a team thing. I couldn’t do my job without the people in the front taking in the work and we kick things around. I’m not the only one coming up with ideas.”

DT to TW: “I see all this complicated equipment back here, and I have no idea what this is. What do you do?”

TW: “This is an engraving machine. I’m getting ready to put a monogram on this ring right here.” 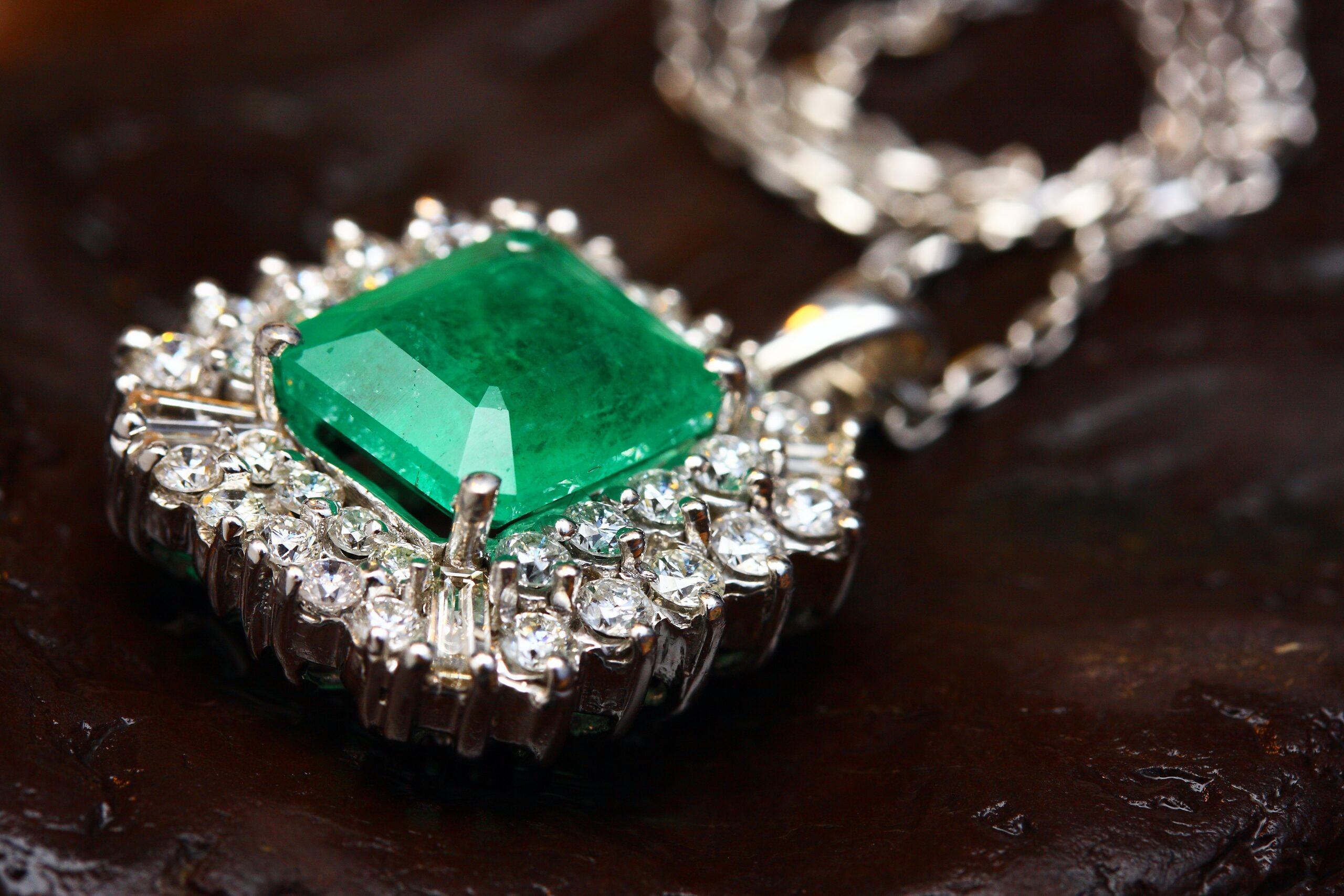 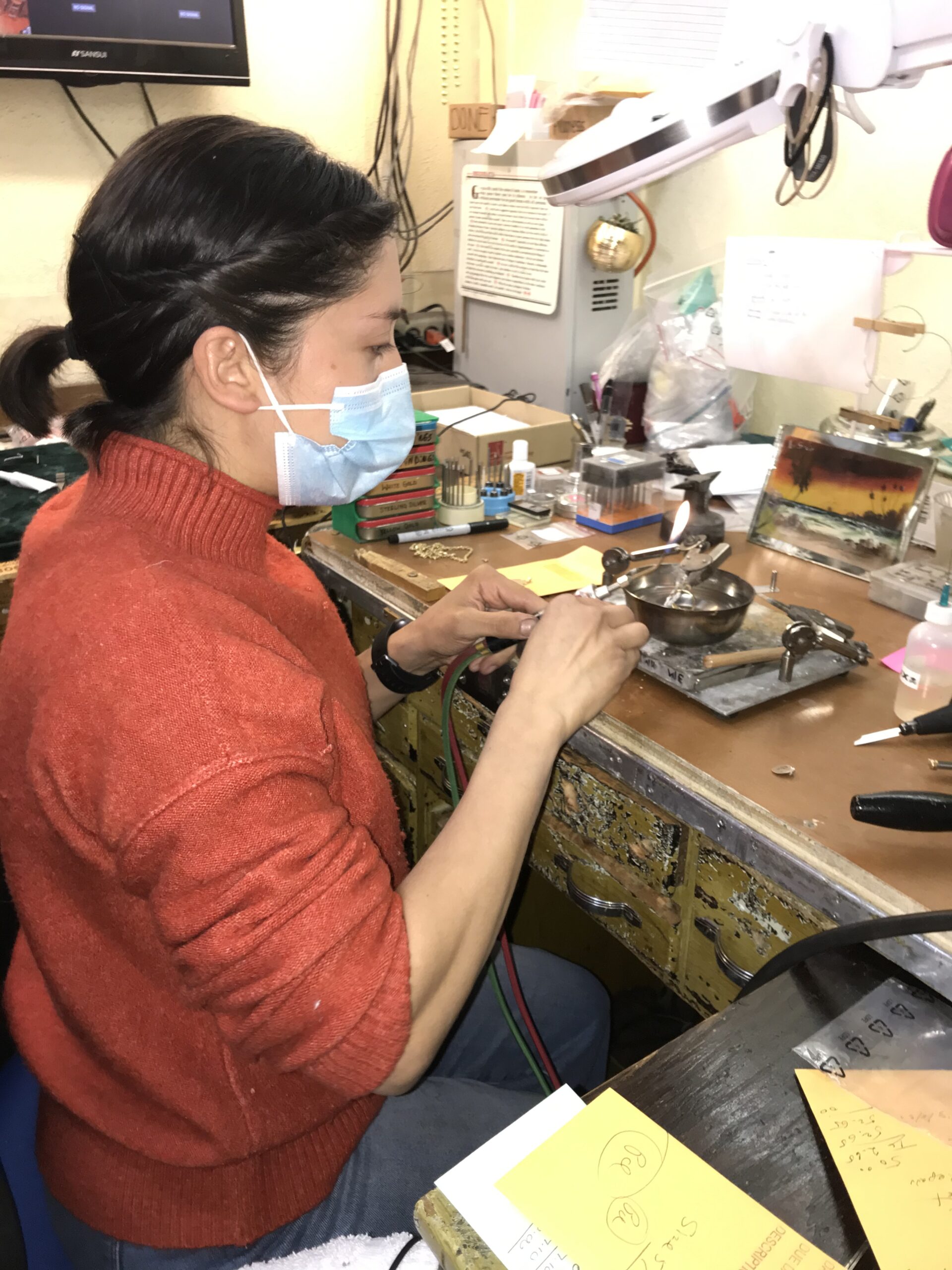 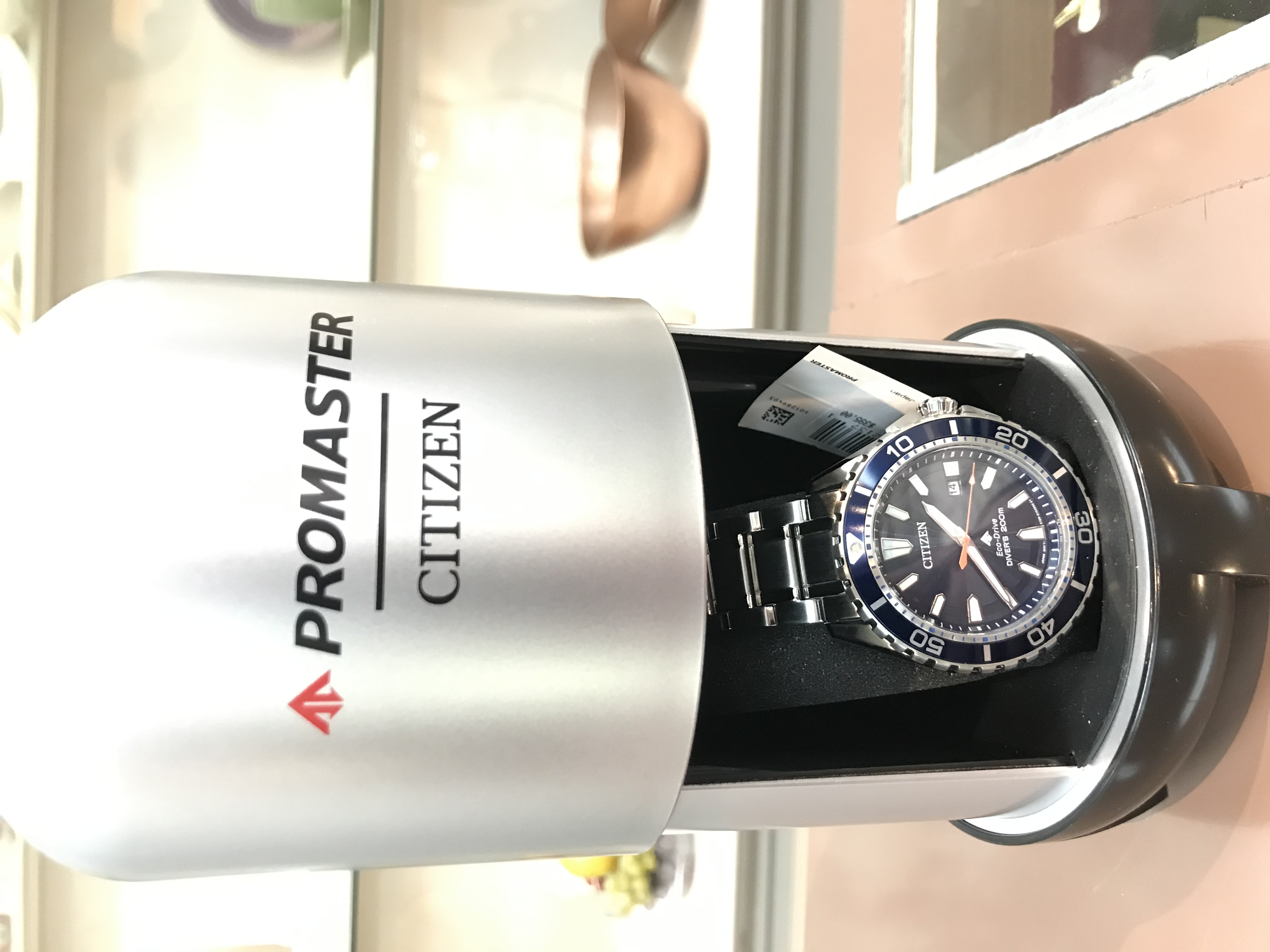 TW: “I do different engraving, which is done with a laser over there. I do CNC work.”

CNC is also known as computer numerical control. This is defintely a high tech shop!

TW: “All of it is. All of this is CNC. We’ve got a CNC mill upstairs I’m working with right now. And [I’m] doing casting work. Basically anything anybody needs now.”

TW: “Sometimes. Just depends on how complicated it is. This is the 3D printer right here. So we can just 3D print jewelry pieces if we need to. If it’s super complicated, we’ll send it out and let somebody else do it.”

DT: “So you 3D print your design idea and then cast it?”

PW: “We actually make the casting from the wax. So you take that upstairs and coat it or basically make [a plaster mold] and use that. The wax burns out less of the gold.”

DT: “I never thought about what the back end of the jewelry trade looks like. I mean, this is a machine shop!”

PW: “We do a lot of plaques and engraving.”

This led us into a conversation about schooling, the trades, and education. Tate’s easiness makes it possible to talk about a lot of things, as though we’d known each other for years. His openness is definitely a plus when it comes to communicating needs and information regarding a custom piece. 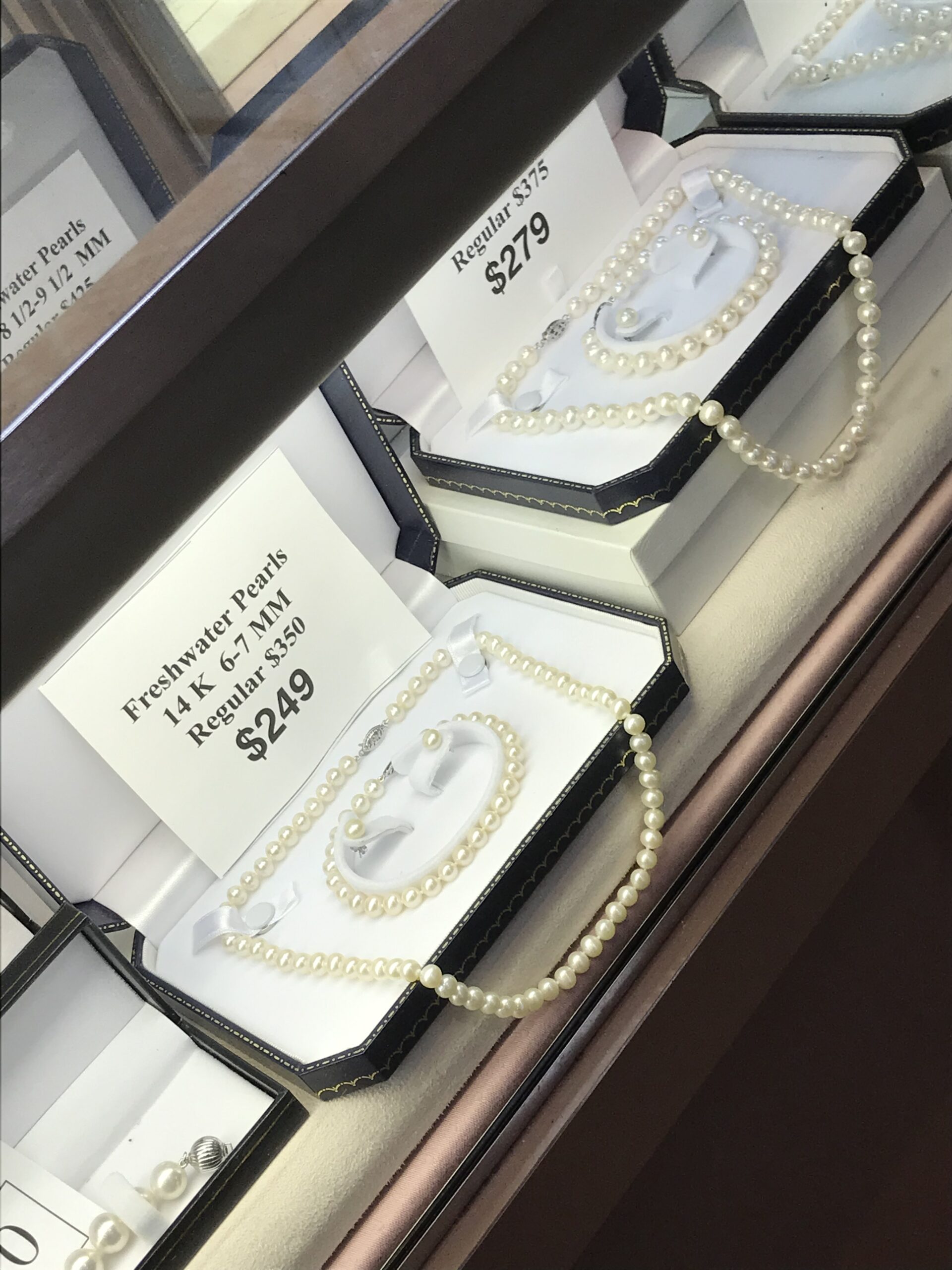 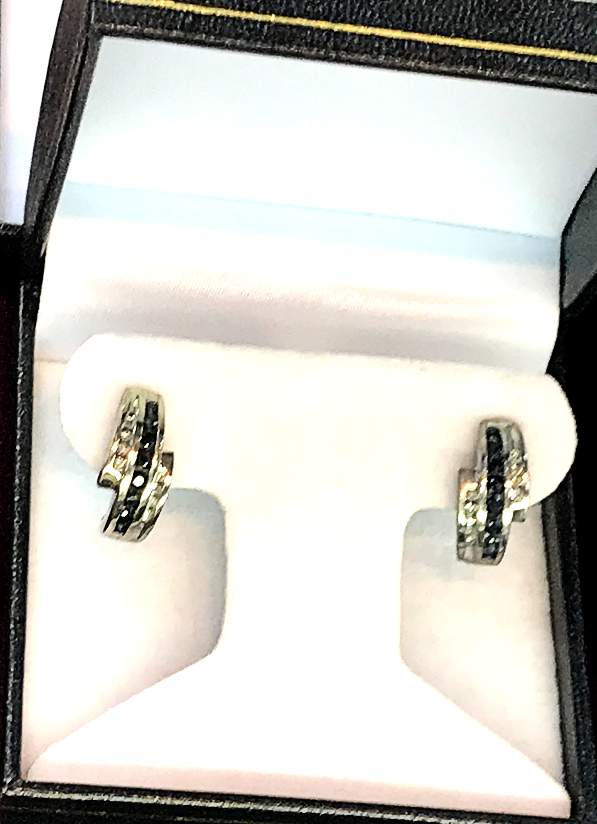 DT: “You think it’s a lot of the family tradition and maybe the way you came up that feed into your ability to do the things that you do?”

PW: “Tommy’s mother was an artist.”

TW: “That was an influence, definitely. But yeah, it was more or less the fact that we don’t turn anything down. We try to find a way to make it happen.”

TW: “That’s just always the way it’s been. Anything that comes in the door, you want to help. You feel good about what you’re making.”

DT: “So it’s personal for you. Your work is very personal.”

TW: “Oh yeah! If the job’s not personal, then you don’t take it as seriously as you should. And I like problem-solving, which is basically what my job is.”

PW: “So to start with, a customer comes in and says, ‘This is the picture of what I want.”

WW: “What I would do then is basically decide exactly what you want, what sizes of things you want. I send that idea to a company that does what’s called CAD work. [CAD, or CADD, is computer-aided design and drafting]. They send me drawings back. A lot of times you have a customer’s stones, you [will then] turn it into a piece of jewelry. And so what I will do is actually order the mounting, have them CAD it to my specs on the diamonds that we have in front of us. Then they’ll actually manufacture the mounting, send it to me, and then I do all the setting work.”

DT: “I never thought of CAD being used that way! So how many custom design pieces would you say you do in a year?”

WW: “I’ll say this on the CAD side, probably five to ten. But as far as hand fabricated here, a lot of our pieces are hand fabricated, made by hand, hundreds, I’d say.”

I am astonished by the numbers, but not by their ability to complete so many custom pieces with quality and style.

Watkins is the type of place you don’t often find anymore, where people really care about what happens to the customers; they care about what they’re doing. They’re not just selling pieces of jewelry, but they’re making sure to provide exactly the right piece that is going to make somebody happy. And that’s what drives them. And it is also what kept owner, Tommy Watkins, from being a part of this conversation; he wouldn’t leave a single customer unattended that came in the door during my visit. 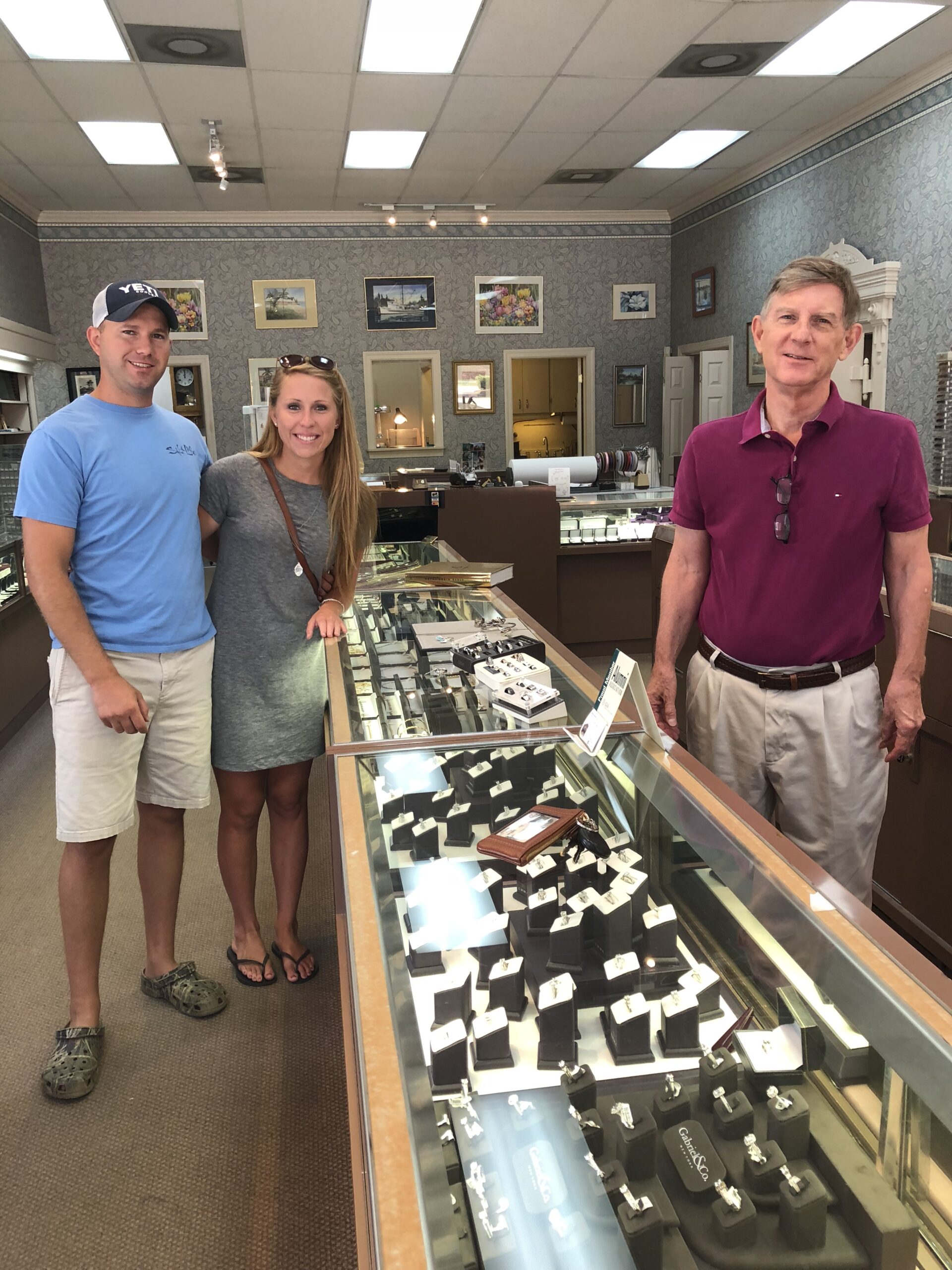